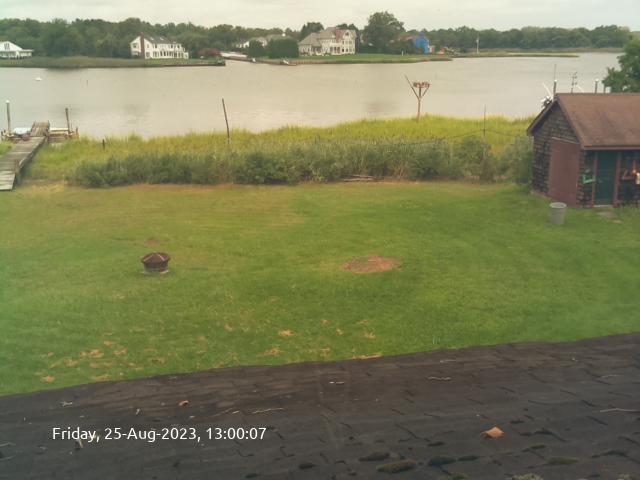 This is a simple weather station recording temperature, humidity, barometric pressure, gas consumption, illumination, and images. It consists of two Raspberry Pis with logging software written in Python and the following sensors:

Weather observations and images are sent to the cloud-based server hosting this site and to Wunderground, where they are displayed on the WunderMap. The RPis are used only for data capture and transmission to the server. The measurement data is stored only in databases in the cloud server, not on the RPi. The temperature sensors include:

A Raspberry Pi camera captures stills at one-minute intervals throughtout daylight hours, give or take, which are combined into stop-motion videos just after midnight. At 24 frames/second the video is 1440 times faster than real time. That is, twelve hours of real time is compressed into a 30-second video.

The calendar above shows dates for which videos are available. Click on Show to see the video. Older videos are purged aperiodically to conserve storage space so the available videos will change from time to time.

The camera is mounted inside and shoots through two panes of glass in colder months and one in warmer months. The panes are not optical glass and the inside one is old wavy glass. The wavy glass, four air/glass surfaces, and some soil on the glass all contribute to reduced image quality.

High-res stills are no longer supported. The Nikon D70 capturing the high-res still images was damaged by a close lightning strike about 8:00 PM on 7 Aug 2018 and has not been replaced.

These graphs show data current as of the past midnight and load much faster than the dynamic ones. The current week is generated daily just before midnight. The Current week static graph together with the Last 24 hours dynamic graph covers the current week to now.

These graphs show data up the the present. They require a bit of patience proportional to the length of the graph and can take several seconds as they are generated on demand.

The climatological data includes temperature averages, lows, highs and degree-days by year, month and day in tabular form and averages, lows, and highs for every day in the year by year in graphical form.

The highs and averages shown during the spring and summer, that is from the vernal equinox to the fall equinox, are higher than actual because the outside temperature sensor is exposed to direct solar radiation early in the morning and late in the evening. The outside wall with the sensor is aligned nearly perfectly with the Earth's east-west axis such that the solar gain is symmectric in morning and evening. This can be seen by the brief peaks at morning and evening in temperature graphs during the spring and summer months. Someday I'll add a radiation shield.

I am interested in recording natural gas consumption with the thought that the data would help identify thermal parameters of my home, areas to improve thermal behavior, and provide feedback for changes. I hope to correlate gas usage with meteorological parameters including temperature and wind. Many years ago and in a different home I made daily recordings by hand of the gas meter during one heating season. That data showed clearly the benefits of keeping the door between the basement and the first floor closed. I'm no longer up for manual recording and daily readings lack sufficient resolution for the usage I want to study and so I looked for an automatic solution.

It turns out that my gas company reads the meter from a vehicle on the street. If they can read it I though I could as well. The technology of Automatic Meter Reading (AMR) is well described online and others have already developed both open-source and proprietery products for this using software-defined-radio concepts. It was a simple matter to glue a few existing parts together to receive the broadcasts from the meter and then write a little software to record and display it.

My gas meter, an Itron 100G DLT, periodically broadcasts Standard Consumption Messages (SCM) in bubble-up mode, a peculiar term that means it broadcasts spontaneously, not on demand from a reader. The messages are received with a RTL-SDR dongle (an inexpensive DVB-T receiver containing a Realtek RTL2832U demodulator and R820T tuner) connected to a Raspberry Pi 2 B+. The RPi runs a program known as RTLAMR (written by Douglas Hall and generously contributed to the open-source community) to decode the meter signal and convert it to JSON text. A Python program reads the output from RTLAMR and send it to the cloud server for storage and presentation. The processor load on the RPi 2 B+ is 100%. It appears to drop some packets but works well enough to provide the meter readings at an adequate sampling rate, typically once every few minutes. The capture process is stochastic in nature because of intereference from other meters in the neighborhood and the frequency-hopping nature of the transmissions.

The graphs linked in the following table explores the option space of graph period, histogram bucket size, and measurement units. This is experimental to help understand the most useful display formats. The % Max column is specific to my Weil-McLain ECO 155 boiler with a maximum input of 155,000 BTUs/hour. It shows the actual usage as a percentage of the maximum input to the boiler. The cost column includes only components proportional to usage (gas and delivery), excludes the fixed Residental Customer Charge. Note that all of the columns display identical data. The graphs differ only in the units and scale factor of the Y-axis.

This site uses modern web technology internally including HTML5, PHP, Javascript, chart, calendar, and date-picker Javascript libraries, Jquery, AJAX, MySql, Python, and more. The user interface is intentionally old school, with none of the distracting elements of modern UI design, and with a nod to Edward Tufte.

Completely removed the Obsolent Links section and supporting files from the site. We have been seeing requests to the supporting files in the server logs even though the linking section was not present on the page. Such requests will now result in an error to the calling client.

Made several internal changes that should not be externally visible.

Added climate charts showing minimum, average, and maximum temperature over specified periods and for one or more years. For performance reasons data for these charts comes from a database created periodically offline, not from the primary meteo database used for weather charts.

Lots of cleanup and tweaking to get sensible appearance of gas charts, especially over long periods. Added option and feature to include temperature data for selected period from prior year.

Added custom date range for charts. Removed remainder of SqLite database use. Added indication in chart of missing data in database with a gray bar spanning the missing interval. It is only shown on the temperature graph. Code cleanup.

Incremental cleanup and styling. Adapted content to screen size by substituting text for dials and changing two columns to one column dynamically.

Finally got around to a major cleanup and reorganization of the site. Replaced video links from a simple list to a calendar. Replaced text current observations with gauges. Moved most interesting items to top. Moved all updates to this change log section. Separated documentation from chart links.

Replaced the baro/humidity sensor fried a year ago with a new one.

Physically removed the fried D70 camera. Added a new Raspberry Pi camera for osprey nest observation. Mounted both on a single platform supported on one tripod.

A lightning strike at about 8:00 PM on 7 Aug 2018 fried the baro/humidity sensor and the D70 camera. Will deal with it someday.

I finally added a radiation shield to the outside temperature sensor. This should eliminate the little spikes in temperature in the morning and evening on days between the equinoxes when the sensor was getting some direct sunlight.

I replaced the Bosch BMP280 I2C with a Bosch BME280 I2C, which includes humidity, and now report inside humidity in the latest obs. Added a TSL2561 I2C illumination sensor and now also report illumination in the latest obs. The sensor is near a north-facing window inside the house, not in direct sunlight yet, and reporting in Lux, not Watts/square-meter. Eventually I may log both in the database, make graphs, and move the baro/humidity sensor outside.

Experimenting with capture every minute.

Added a second camera, a Raspberry Pi V2. Exploratory. Presently this captures a 640x480 image every five minutes and uploaded here for display, for videos, and to Wunderground.

I added a Bosch BMP280 I2C pressure and temperature sensor to the station. The barometric readings are stored in the database, displayed in Current Observations and dynamic graphs, and reported to Wunderground. No static barometric graphs yet and possibly never. Humidity is coming. Note, while there is some variance between the barometer readings here and some nearby private weather stations as reported on Wunderground, the elevation-corrected value here agrees with the nearest National Weather Service station - Belmar-Farmingdale (KBLM) - to within a fraction of a percent. The inaccuracy of the other stations may be due to inadequate elevation compensation.